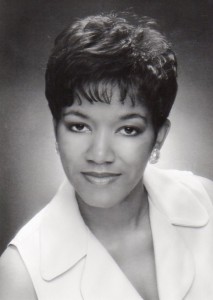 Bridget Anderson lives outside of Atlanta, Georgia, with her husband and a dog that she swears is part human. She graduated from the University of Louisville with a degree in counseling & guidance, and did some post-graduate work toward an M.A. in clinical therapy at Spalding College. Then she lost a coin toss and move to Atlanta, Georgia, where she began her writing career. Bridget’s currently a member of Romance Writers of America, Georgia Romance Writers, and The Authors Guild.

Bridget’s novels include: Soul Mates (1997), a romance with a supernatural element that was nominated as best paranormal romance by Affaire de Coeur Magazine for that year; Imani (1997), part of the Moonlight & Mistletoe holiday anthology from Kensington, which was also nominated by Affaire de Coeur Magazine as best ethnic romance for 1997; Rendezvous (1998, 1999), a romantic suspense novel was later adapted into a BET made-for-TV movie that aired nationally in November 1999; Lost To Love (1999); Reunited (2001); All Because of You (2002); Hot Summer Nights (2003); Identity Crisis (2004), part of the suspense anthology Where There’s a Will; Hotel Paradise (2006); and Sweet Memphis Crush (2007).

In addition to the novels, Bridget is a former staff writer for Novel Advice, a cyber-journal, and her articles have appeared in Georgia Romance Writer’s & Kentucky Romance Writer’s monthly newsletters. She has spoken at several writers conferences including: Moonlight & Magnolia, Atlanta, Georgia; Memphis Black Writers Conference, Memphis, Tennessee; Duel On The Delta Writer’s Conference, Memphis, Tennessee; and Writing in the LowCountry, Beaufort, South Carolina. She also judges writing competitions and speaks to reading and writing groups.

When she’s not writing or watching a suspenseful movie, Bridget loves to travel. Her favorite locations so far have been Ghana, West Africa and Paris, France.